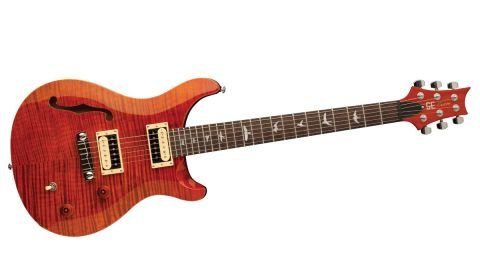 PRS Semi-hollowbody with a Smooth-feeling Trem

This PRS SE Custom 22 Semi-hollow electric guitar is a workhorse guitar with a distinctive edge. It sports a mahogany body with an eye-catching maple top. Plug it in and the dual vintage-inspired 85/15 S humbuckers come to life, serving up clear tone imbued with warm resonance. And the genuine PRS tremolo is one of the best in the business. Like all PRS instruments, this instrument's sheer playability will inspire you to reach for new creative heights. Onstage or in the studio, the PRS SE Custom 22 Semi-hollow delivers the goods.

The Paul Reed Smith Custom 22 Semi-hollow electric guitar sets itself apart from PRS's other Custom-series instruments with its thinline construction. By using this popular construction technique, PRS has created an instrument that sings with the sustain and feedback-resistant nature of a solidbody, while imbuing its tone with extra air and sweetness. Not to mention, this also makes the PRS Custom 22 Semi-hollow a much lighter instrument for those marathon gigs.

To give this PRS SE Custom 22 Semi-hollow electric guitar a rich yet balanced sound, PRS began by choosing the tried-and-true combination of mahogany topped with maple. This instrument's mahogany body gives you natural tonal warmth, which is offset perfectly by the brighter tone of its maple top. Together, these tonewoods give you an incredibly balanced sound with body and snap.