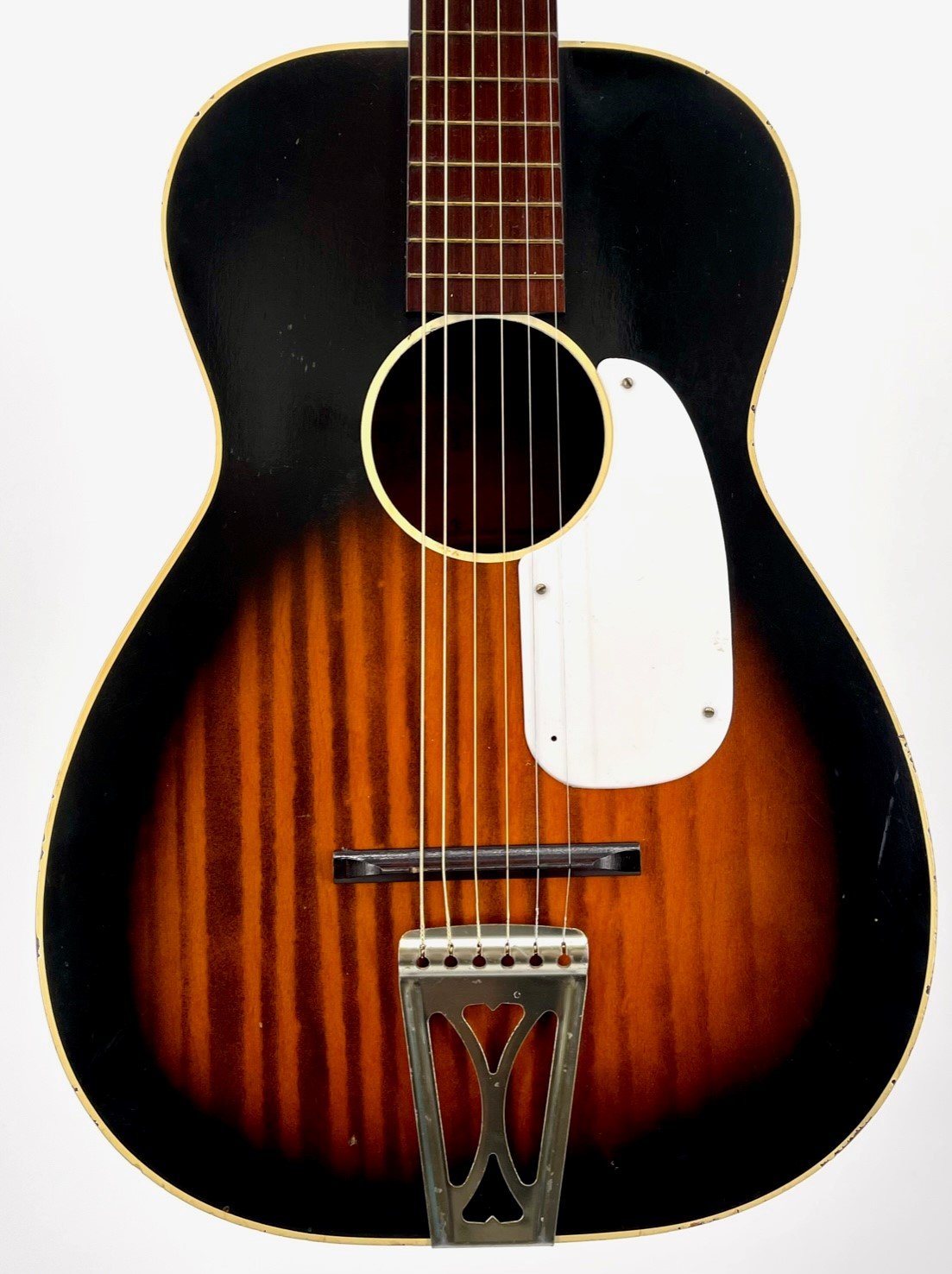 
Until the 1970s, the Harmony Company used only solid woods for just about every acoustic flat top instrument they made. Their Stella instruments were made from solid slab-sawn birch, which to the untrained eye often has a grain pattern that looks rather like wood, Harmony Stella guitars usually have a poplar neck with a dyed maple or birch fingerboard. High-end Harmony flat tops feature solid mahogany and solid spruce components.


Stella was a brand of guitars owned and operated by the Oscar Schmidt Company and was founded around 1899. The company produced low to mid level stringed instruments.

The Stella guitar was great for playing blues music, and were played by several notable artists including Leadbelly and Charlie Patton. Doc Watson began playing on a Stella guitar.

Kurt Cobain of Nirvana played an acoustic Stella guitar on the recording of the song Polly from the Nevermind album. Stella was acquired by the Harmony Company in nineteen thirty nine, and the brand was dissolved in the 70s. It has since been reintroduced by M.B.T. International, which now owns the Harmony company.


Article I found about Stella instruments:
We all have had them and we all love them. The number of baby boomers who started guitar lessons on a Harmony student guitar was great. They were affordable and quite playable. The student guitars made by the Harmony Guitar Co. of Chicago were readily available to the masses.
Most music stores carried them along with a whole assortment of mail order catalogues. Sears, who owned the Harmony Company, made these guitars available to their customers under the Silvertone Label. Most of the guitars I see appear to be from the sixties. Mainly because of the guitar boom during the Beatles generation, there were a large number of guitars sold at this time.

Harmony made more than one half of all the guitars made in this county, more than all the other manufactures together. Most of these were the flat top acoustics.

Many a beginner started with a sunburst Stella by Harmony. Harmony bought the Stella name in 1939 and continued to make them as a low-end student guitar.

Using the Stella registered trademark, they marketed these student guitars for the masses. These small body guitars still show up from time to time. Most have a floating wood bridge with the pressed metal tailpiece.

Some of the older ones have a piece of metal fret like material for a saddle. I have seen some student guitars with a wood tailpiece from the 40's when metal was a scarce commodity.

Many Harmonys I've seen incorporate an Hxxx in the serial number. Dating them seems to be a little more complicated. Some seem to have an F-66, FW-59 or similar number stamped inside the guitar, along with "Made in the USA."
This number appears to indicate the year of manufacture, but doesn't appear all the time. It confirmed the dating of some guitars I have, with what I surmised to be their date of production.
Most of the model numbers in the later 60's have this Hxxx. These H929 Stella models have been seen with both 3 x 3 tuners along with a H933 that had 6 on side headstocks.
These guitars were most commonly sunburst. There was natural model, an H927 during the 60's, along with a tenor HTCG929 and a smaller size H9293/4.
I have seen some "bananaburst" or Ivory grained finish on some Stellas from the 40's and 50's, which seem to be a No.928 model of the early 60's. Other models from the early 60's were a No. 1141 and No, 930.
These earlier models don't seem to have the "H" in the model number. The model number didn't matter because they marketed an assortment of 6 guitars for $ 144 in 1962.
At $ 24 a guitar it gave the young student an affordable option. In the late 60's there was a better quality Stella offered by Harmony. This H942 natural (H943 Sunburst) grand concert size guitar offered "time-tested Stella features of construction and finish," and sold for $ 37.50.
With its " Steel Reinforced neck" and "Simulated marquetry ring at soundhole, it was an attractive upgrade to the H929 Stella, with the added feature of a screwed down bridge.

Some of the other budget small guitars have a screwed down rectangular bridge, with many of the older ones being made with solid wood. (You can usually tell by the cracks when they dry out.) Some of the H150's and the classical H937s were called the Harmony Studio Specials.

These were noted as being "Best for the beginners or 'loaner' Guitar. " They had a short 3/4 scale with less space between the frets that made finger placement and chord formation easier for little fingers.

"Perfection," was Harmonys goal, through out its history. Its claim to have sold "more stringed instruments than all other makers in America Combined- and thus created thousands of friends for Harmony all over the world," held true.

They found their way into more American Homes than any other guitar company. They made themselves available to the masses so the student had an affordable option. They are still available today as one of the more affordable American Vintage Guitars. Start collecting today!!