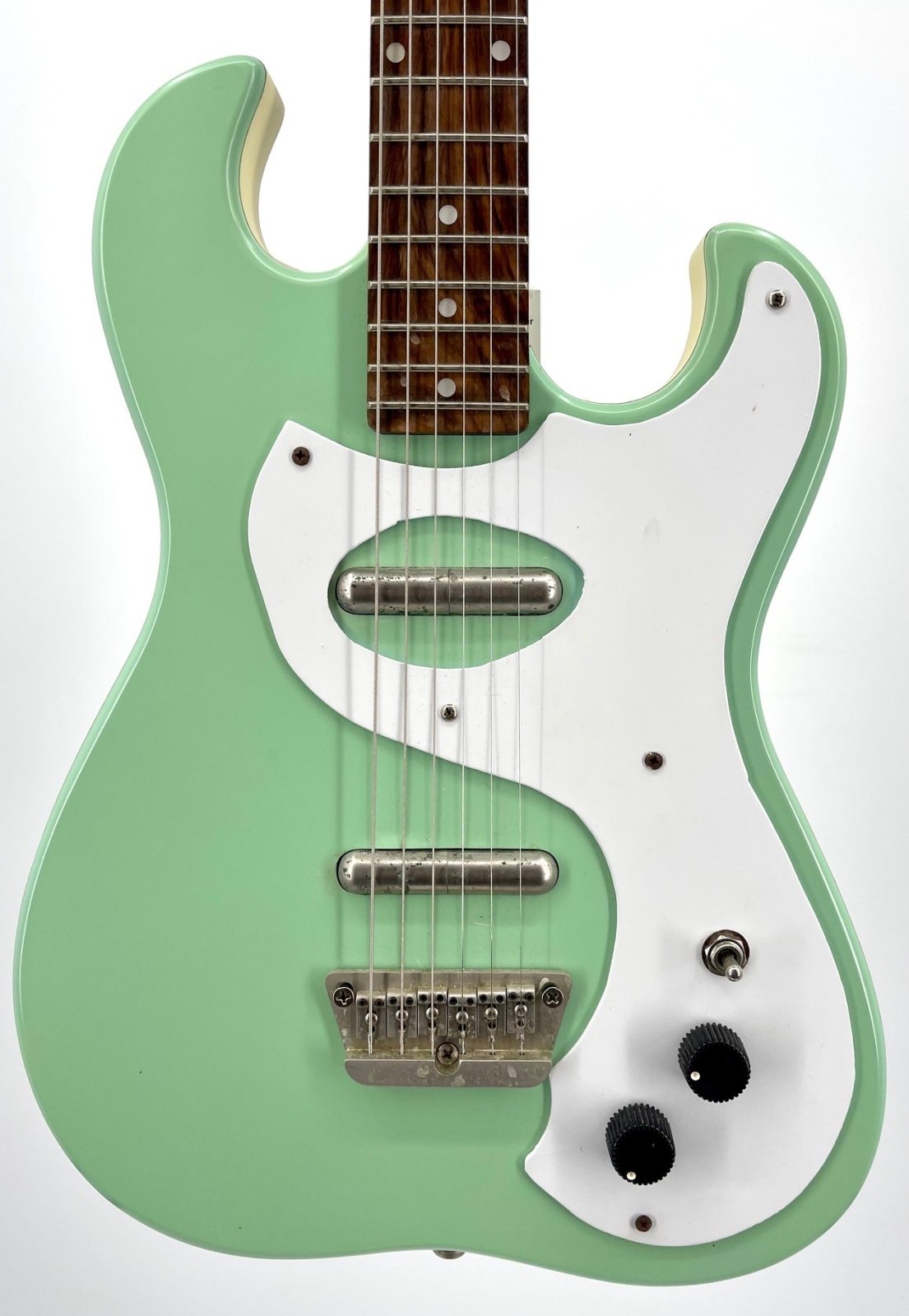 White Vinyl is peeling on the upper cutaway, there is also a chip on the top of the headstock

Pickups/Electronics: Single-Coil Lipstick pickups in the neck and bridge with master volume and tone controls and a 3-way selector switch.

With their lightweight bodies and distinctive lipstick-tube pickups, the original Danelectros of the early to mid-'60s created a sensation amongst budget rockers and pros alike. Now the the popular semi-hollow 1449 model has been brought back to life as the Dano '63.

But it wasn't just twang kings like Dick Dale and his ilk that celebrated the wonders of the Danelectro; players as disparate as Jimmy Page and Elvis Costello revered the 3/4-sized guitars and coaxed unearthly sounds, both impeccably clean and gloriously gritty, from their chambered little bodies. The Dano '63 is a deliriously fun ride back in time that feels strangely current.

The Dano's body is mostly faithful to that of the original. Constructed on the front and back from a Masonite 'sandwich', it features an inner plywood core (the original had a core made of poplar) that runs from the neck pocket to behind the bridge. This core is chambered around the sides and behind the bridge, giving the guitar a resonant and very "alive" sound (rather like that of hollow-bodied, f-hole models), even while being played unplugged.

While much is made out of some electrics that have pronounced unamped abilities, it is especially noteworthy in a guitar this compact and lightweight. Usually the temptation with any electric is to plug it in as soon as possible, but we found ourselves happily picking the Dano unplugged for over half an hour before giving thought to an amp. That's a biggie.

Our model arrived with a decidedly retro "Keen Green" finish -- seven other finish options are available. There is a large, wavy pick guard, constructed of wood and painted white, that encircles the neck pickup and takes up roughly half of the guitar's body. The instrument's famous, exaggerated contours are vaguely reminiscent of a Fender Stratocaster, and its rounded double-cutaways allow easy access to top frets.

Running along the edge of the body is a vinyl tape that is tinted convincingly to appear aged. In playing position, the guitar looks small and thin (that's because it is), and in this case that's a compliment. Because of its flat body shape, the maximum depth is the same all around: 1-3/4 inches.

The C-shaped neck is maple, with an unbound headstock. With a scale length of 25 inches and 19 frets, the Dano, again, at first felt somewhat tiny, but we got used to the size very quickly. The neck is securely joined to the body at the 14th fret by two large screws behind the back. (The original 1449 was connected with three bolts.)

The fingerboard is bare rosewood, adorned with small, pearloid plastic inlays. Fretting is fast and smooth. The fingerboard radius is a flat-feeling 14 inches, which might seem surprising for a guitar that is a vintage reproduction, but it's a breeze to navigate -- indeed, our fingers were twangin' away along the medium-but-feel-like thin fret wires.

Whether busting out our best surf chords or performing some Sleepwalk-like bends and vibratos, the factory-fitted D'Addario XLs (10-46) strings positively sang out. By the way, how nice to have a guitar that arrives out of the box perfectly tuned and ready to go? That in itself is worth a big mention.

The narrow, back-angled headstock features the traditional, futuristic-back-then-and-still-looks that-way Danelectro logo. The aluminium nut (1.650 inches in width) is screwed into place. Tuning, which we had to do rarely, even after extended play, is accomplished via high-ratio sealed gears that have a matte nickel finish.

The Dano's bridge is brass, and the strings run overtop six, individually adjustable saddles. The bridge is afixed via three visible screws at either side and at the bottom. It's all very diminuative, and we were able to bash away without ever once hitting any metal whatsoever.

The single-coil, lipstick-tube pickups differ from the vintage models; those pickups from the '60s were housed in actual surplus lipstick cases, sometimes in two separate pieces that were visible from the front, whereas the Dano '63 features a brilliant re-creation that has a wax potting to eliminate noise. They pass a standard 3-way switch, located just above the tone and volume knobs, that gives us neck, neck and bridge, and neck only.

The round plastic volume and tone control knobs are located near the bridge, and the side-mounted output jack is held securely with two screws. We removed the guitar's round backplate to reveal some very tide electronics, although it was interesting to see the wires bound together with a twist-tie - surely, that wasn't a characteristic of the original.

Here's where the real fun starts. Played clean in the first position, the Dano has a bell-like jazzy tonality. Notes are full and warm, but there is no mushiness. The second position is a wonderful, hotter combination of the two pickups in series, as chords and notes ring out like chimes.

The third, bridge position is a more brittle sound, but still, the depth of tone remains. Kick up some amplifier dirt and the Dano puts the right amount of stink on the notes, but the grit is true - we're talking gnarly, and no amount of distortion or pickup selection varies the tonal brilliance. These are some hot lipsticks all right, and they are absolutely for volume. Turn 'em up and let 'em go.