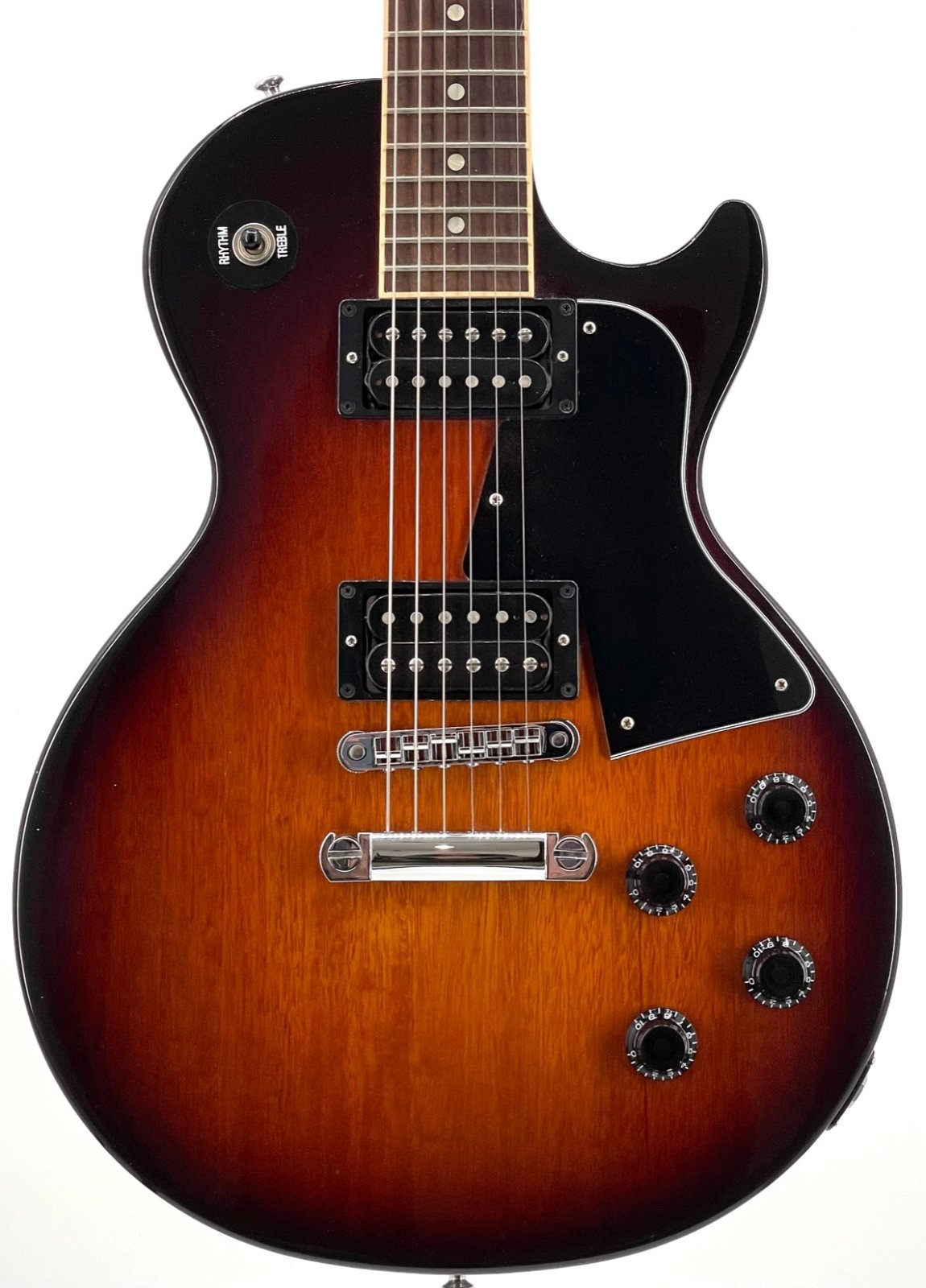 Overall Condition: Very Good.  There is some paint chipping on very top of the headstock, there are some Dimple depressions in the back of the neck and there is a dent on the edge of the back.  All of this is shown in the pics provided.
There also some small dimples in the top of the the body but they are very hard to take pictures of.

Originally introduced as an affordable “student” model to bring novice players into the world of Gibson quality, the Les Paul Junior has remained a no-nonsense favorite of rock ’n’ rollers ever since its introduction way back in 1954. This single-cutaway, slab-bodied electric guitar always has had a simplicity and affordability that has appealed to punk, blues, grunge and garage rockers, along with an impressive tonal depth and purity that has landed it in the hands of players in plenty of other genres as well. Originally issued with a single P-90 pickup in the bridge position, This Les Paul Junior has been modified to humbucker status by players seeking thicker, creamier tones. With the Les Paul Junior Special Humbucker, Gibson USA takes you straight there in a pre-modded, hotrodded dual-humbucker guitar equipped to carry you everywhere a Les Paul Standard wants to go. Powered by two of Gibson’s most popular genuine humbucking pickups, loaded with classic hardware in Tobacco Burst, all in hand-sprayed nitrocellulose lacquer—the Les Paul Junior Special Humbucker is an outstanding value in an astoundingly versatile electric guitar.

At almost every turn, the Les Paul Junior Special Humbucker pays respect to Gibson heritage and tradition. Just like the first Les Paul Junior built in Kalamazoo 58 years ago, the Les Paul Junior Special Humbucker is made from solid mahogany. An archetypal tonewood used in countless classic Gibson electric guitars, mahogany has a sonic depth and richness that pulses through every note, yet always remains clear and articulate. The guitar’s neck is made from quarter-sawn mahogany, carved to a fast yet comfortable profile that measures .800” at the 1st fret and .875” at the 12th. The fingerboard is made from rich brown baked maple, a heat-treated hardwood that offers outstanding tone and excellent durability, as well as a traditional appearance. Beyond the PLEK-cut Corian™ nut, the headstock is adorned with gold silkscreened “Gibson” and “Les Paul Model” logos, and a two-ply black/white plastic truss-rod cover engraved with “Special.” In an upgrade of the original Juniors, the fingerboard carries stylish white binding, while the guitar wears a five-ply plastic pickguard in the image of the original two-pickup Les Paul Specials.

To deliver all the meat and muscle you’ll ever want to muster, the Les Paul Junior Special Humbucker carries two of Gibson USA’s most popular humbucking pickups, a 490R in the neck position, and hotter 490T in the bridge position. Both are made with genuine Alnico II magnets for creamy, rich, warm tones in the rhythm position and plenty of growl and punch in the “lead” position, with groovy round, funky tones in between. These pickups provide superb clarity and sustain, easily achieving the full range of tones that have made humbucker-loaded Gibsons unparalleled classics for more than five decades. For hardware, the Les Paul Junior Special Humbucker packs the traditional set of Tune-o-matic bridge with stopbar tailpiece for superb sustain and resonance, with vintage-style, pearloid-button tuners.