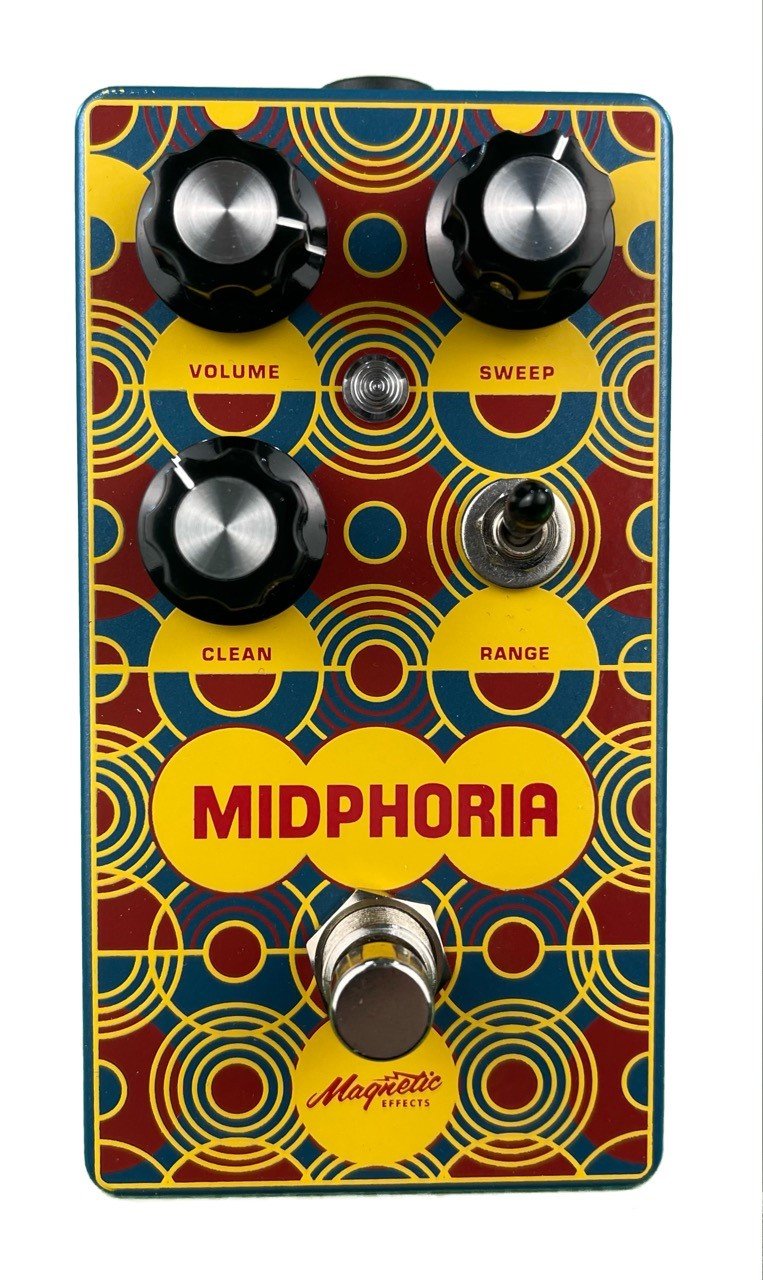 The modern stompbox boom has seen its share of re-combined effects. Stack a phaser on top of a tremolo and run it through an echo—all with the touch of a single footswitch? Sure, I’ll try it! But not many builders hone in on specific features of pedals, refine them, and develop them into standalone effects.

Though fixed-wah-style filters are far from new (Maestro’s MPF-1 Parametric Filter was an important ’70s example), they are an example of this kind of effect. On the surface, removing the expression pedal capacity from a wah seems musically limiting. In reality, it opens up other filtering and performance possibilities. And Magnetic Effects has done an excellent job making the most of those possibilities with their new Midphoria pedal. It can summon monstrous rhythm chords, uniquely pinched and squawky lead riffs, and a thousand tones in between. It also doubles as an excellent clean boost.

There’s no need to shy away from the upper range of the sweep with single-coil guitars.

Sweeps and Switches
Midphoria’s impressive psychedelic-meets-deco paint scheme makes it an appealing target for your stomping foot. The control configuration is straightforward, but opens up a lot of tone variation. The volume knob is self-explanatory, but it can also be used on Midphoria to produce a clean boost by rolling it counterclockwise and turning up the clean control, which is used to blend the dry and filtered output. The sweep control moves through the filter’s range the same way an expression pedal potentiometer would—except you can easily set it at a fixed point and leave it there without worrying about a wandering treadle. The fourth control is the 2-way range toggle. The down position emphasizes the lower-frequency range of the sweep. The up position gives you access to the higher, or “toe-down,” frequencies.

The input and output jacks are located on the crown of the box, along with the 9-18V DC power jack. Pulling off the back cover reveals that there is no battery option, and that the guts of the Midphoria are handwired and very well put together.

Cons:
Some players might prefer inclusion of a simple fuzz or overdrive.

Finding the Sweet Spot
One question folks tend to have about cocked-wah effects is: “I have a wah, why would I want this?” Good question. So here’s a follow up. Have you ever been wheedling away on your favorite wah and found a position that sounds perfect only to lose it once you pull your foot away? I know I have. In a live situation, finding the perfect filter notch isn’t easy—especially if your wah is well-travelled and a little worse for wear. Its in these situations that the Midphoria becomes invaluable. That epic opening riff of Dire Straits’ “Money for Nothing”? You can dial it up in an instant and leave it there. (My own formula for Knopfler’s riff, by the way, was a Les Paul plugged into a Fender Champ, a little extra dirt from a TS9, the Midphoria’s knobs at high noon, and the range switch in the down position.)

Looking for more headroom, I hooked up an Orange OR50 and a 4x12 cabinet and had a stab at Jimmy Page’s massive lead tone on “No Quarter” using a fuzz-assisted Midphoria. It was as easy as rolling the sweep parameter back to get a more guttural tone while utilizing the neck pickup of the Les Paul. Power chords take on a focused, gargantuan presence with this setup as well—fuzz or no fuzz.

When using treblier Fender single-coils, I needed to roll the sweep control further back to achieve the same low-end growl. That said, there’s no need to shy away from the upper range of the sweep with single-coil guitars. By putting the range toggle into the upper region and carefully manipulating the sweep control, I could get plenty of toe-down tones that added shimmer and warm presence to leads just as much as tear-inducing top end (though you can dial plenty of the latter in, too). With the sweep set around 3 o’clock, and clean around 2, my Jaguar produced a sharp, aggressive tone that sounded killer with double pull-offs in the upper regions of the fretboard. But I could just as easily push the clean level and use the effect as a boost with a hint of filter. That flexibility is an enormous asset in the studio and in performance, and it exponetially enhances the versatility of the Midphoria.

The Verdict
I loved the Midphoria’s unique tone colors and surprisingly wide range of applications. Having the ability to pinpoint filter frequencies is a great way to expand your tone palate without having to continuously tap dance with a wah. And the capacity to control how much filter you hear makes the pedal even more flexible. Midphoria works remarkably well with humbuckers and single-coils alike. And though high-headroom amps better capture the heft and rich overtones in Midphoria’s impressive low-end tones, Midphoria can make a little amp bark in unique and aggressive ways. Indeed, despite their shared filtering DNA, Midphoria is a very different effect than a simple wah. In fact, I’d like to make the case that a Midphoria and a wah on the same pedal board is a very smart proposition for guitarists that like a lot of lead tones at their disposal.