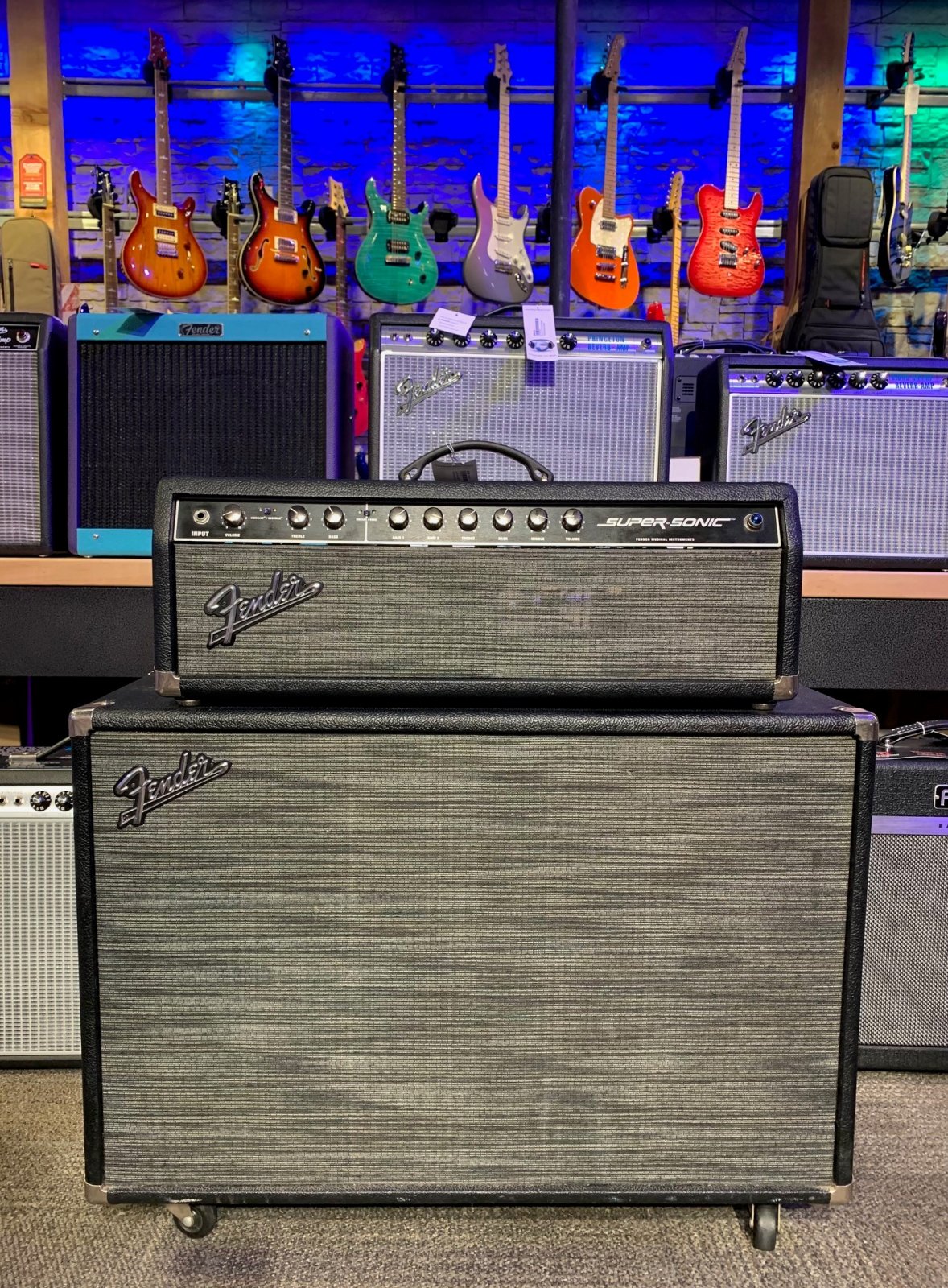 
The Super-Sonic is Fender's response to a lot of requests for a contemporary high-gain valve amp. Powered by a 60-watt dual 6L6 output stage, the Super-Sonic is available in 1 x 12 combo and head formats, with a choice of two cabinets and two colours: either the very vintage Blonde Tolex/Oxblood grille combination, or Fender's new 'Black/Pepper' look, as modelled by the combo.

That aside, the cabinet is well appointed, whichever style you go for. Tough, hardwearing vinyl matched with an equally strong grille cloth, plus extras like the combo's tilt-back legs are what we expect from Fender, and the Super-Sonic doesn't disappoint.

We're undecided about the Black/ Pepper version, though. It's not that it looks bad; it's just that the classic Blackface look is so perfect in terms of style and function that we don't think it can be improved on. The Blonde/ Oxblood option is also far prettier.

The Super-Sonic's electronics are held on four PCBs. The main preamp and power supply boards are through-plated, while two more PCB strips that aren't through-plated handle most of the front- and rear-panel control

Crucially, all of the valve bases are chassis-mounted and hand-wired, as are the loudspeaker jacks and mains switches, considerably improving the Super-Sonic's prospects for long-term reliability.

We're also impressed with the Super-Sonic's transformers, which are larger than Fender have used in the past for this size of amp.

The Super-Sonic's name may cause a few erroneous comparisons with the mid-1990s Prosonic model, but its topology is actually a lot closer to the PCB-based reissue Fender Concert, although there are a few twists that give the Super-Sonic a good deal more versatility.

The clean Vintage channel has volume, treble and bass controls, along with a small push-button that switches the mid emphasis to approximate either the tones of a '59 Bassman or a '65 Vibrolux Reverb. This function can also be footswitched.

The lead channel is called 'Burn' and offers plenty of scope for doing just that, with a pair of cascaded gain controls, three-band EQ and a master volume.

A level control for the built-in long-pan reverb finishes off the combo's front panel. Moving to the rear, there's a footswitchable effects loop with adjustable send and return level controls, as well as preamp out/ power amp in insert jacks.

All in all, it's a lot of amp - there are no less than ten valves on the combo and eight on the non-reverb head.

The Super-Sonic's vintage channel is big and bold. The lack of a midrange control isn't a problem as there's plenty of range on the two remaining knobs, while the mode switch takes care of the big tonal difference between tweed and blackface voicing.

We tried this channel with a wide variety of humbucking and single-coil guitars, including an all-original '64 sunburst Strat and an early 1970s Telecaster retrofitted with Joe Barden pickups, as well as our benchmark '94 PRS McCarty.

On many amps, the best sounds happen with the tone controls roughly in the middle of their travel - it's usually an indicator of good design - and that's where the Super-Sonic's most useful tones are.

The Vibrolux switch setting gives a fat, expansive sound, with a nice, sweet treble response and a reasonably tight bass.

Switch to Bassman mode and the mids are reduced and shifted for a gnarlier effect that sounds good when the volume control is wound up enough for a gentle overdrive, especially if you drive the amp with a meaty pickup - the Barden-equipped Tele sounded great here.

The Burn channel is excellent, with plenty of distortion available from those two gain controls. Lower settings deliver an excellent crunch tone with plenty of bite that's perfect with a Strat for Texas blues heaven. Push the gains higher and the overdrive becomes warm and round with a nice edge to it that helps pull out the harmonics, even with midrange-heavy humbuckers.

Santana fans will be particularly impressed with the sustain: with both gains maxed out, it's almost endless, and there's a subtle change in note timbre as the volume decays, making for a very vocal quality.

Again, the tone controls on this channel are wide-ranging and powerful. We'd recommend starting in the mid position and adjusting to taste from there, although you can get some interesting effects using extreme settings.

Players hungry for even more gain and distortion will be pleased to hear that the effects loop can also be used as a footswitchable boost, simply by connecting the send and return jacks with a patch lead and adjusting the levels to taste.

The combo's reverb is good, as you'd expect from Fender, but there's way too much level on the control and we don't think anyone will ever run this knob past 2 or 3.

Beyond that, the reverb spring's delays get a little splattery and it's less of the enhancement that a good reverb is supposed to be. The Super-Sonic's noise levels are well inside what we'd consider acceptable for this type of amp.

There's a very slight background hum that some might find intrusive for recording or home practice, but most players will be able to live with it quite happily.