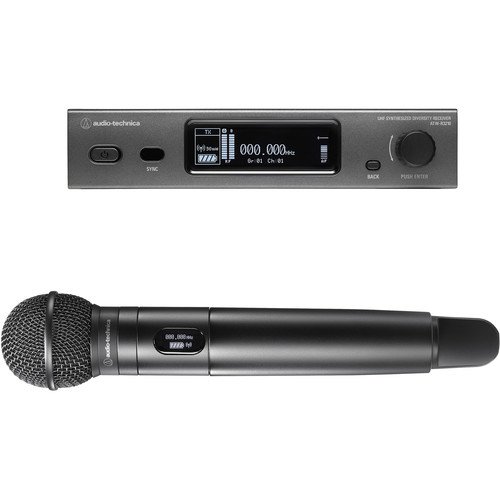 The Audio-Technica ATW-3212/C510EE1 3000 Series Fourth Generation is a frequency-agile, true diversity UHF wireless microphone system designed to give users the power and flexibility to operate within the congested UHF spectrum. The system includes an ATW-R3210 receiver, an ATW-T3202 handheld transmitter, and an ATW-C510 interchangeable cardioid dynamic microphone capsule, and is designed to provide intelligible, natural audio while minimizing potential interference, for stage, television, lecture, event presentation, or house of worship applications.

Operating in the EE1: 530.000 to 589.975 MHz band with 2400 frequencies and a range up to 328', the 3000 Series Fourth Generation system offers a 60 MHz tuning range, which is more than twice of that offered by the previous versions. Frequencies can be easily scanned and selected on the receiver, and then synced with the transmitter via IR sync functionality. In case of interference, the Multifunction button on the transmitter lets you quickly switch to a backup frequency so you can keep working with minimal interruption.

The ATW-3212/C510EE1 ships with an AC adapter and rackmount adapters for the receiver.