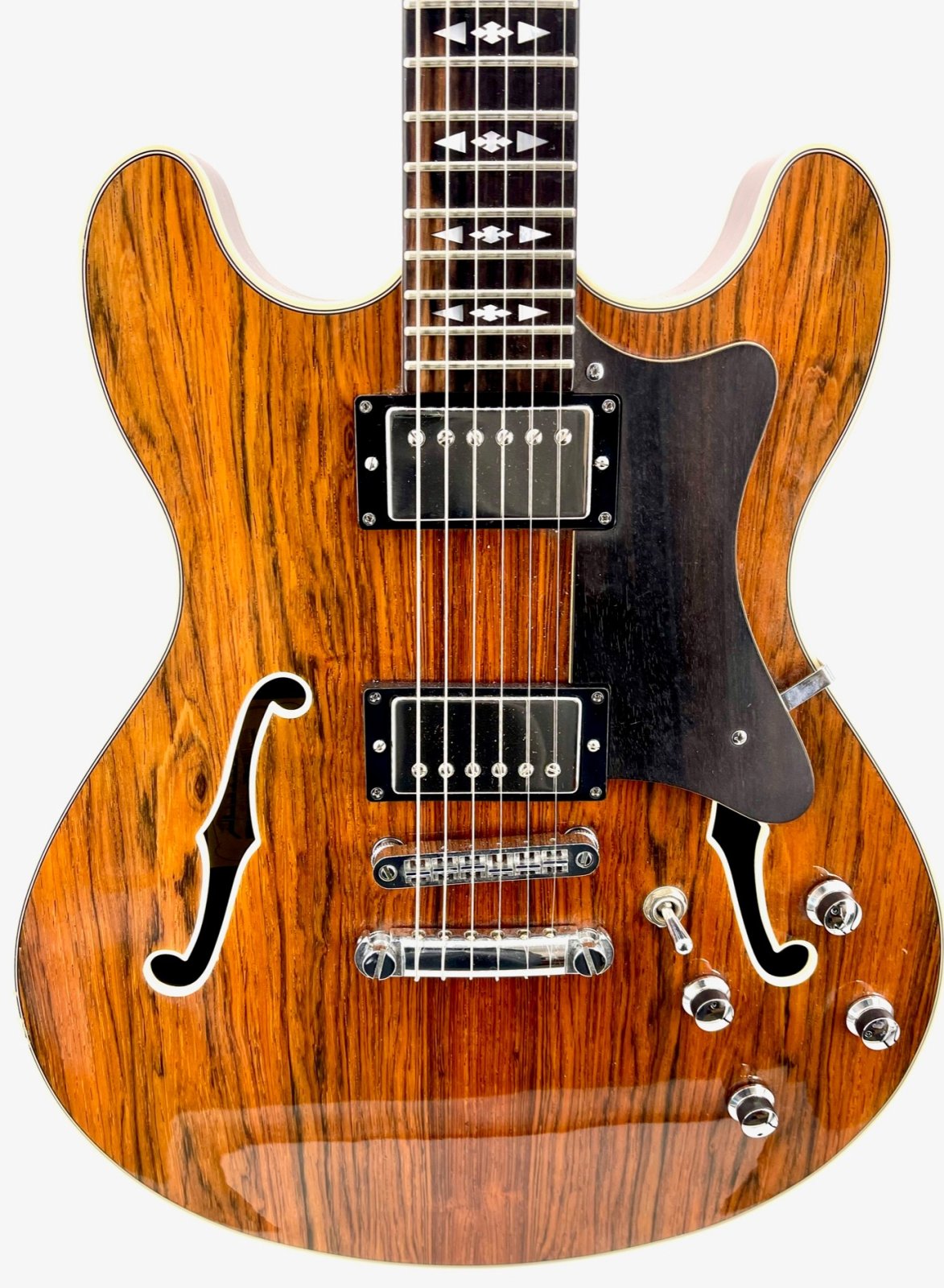 Seymour Duncan Antiquities Pickups
Includes Leatherette gig bag.
For questions or help ordering, call: (513) 843-5739
This guitar is in fantastic condition other than the marks on the back of the headstock and ding on the very top of the headstock, none of which effects the playability.
This guitar has Seymour Duncan Antiquities Pickups installed and Includes the Leatherette Gig Bag

The inspiration is obvious, but proper laminated-body thinlines in the style of Gibson's ES-335 aren't too common. This paucity of competition is one reason why the ES-335 remains such an electric guitar icon.

The Framus Mayfield, however, uses pressed laminate top and back, albeit with solid sides, and a maple centre-block. Pretty much the real deal.
Shape-wise, it's very different, with thinner horns, less bulbous lower bouts and slightly more compact too: 389mm (15.3-inches) across the lower bout and 473mm long (18.6-inches), as opposed to the ES-335's 406mm (16-inches) by 483mm (19-inches). Thickness-wise, however, it's similar with a rim depth of 46mm and a maximum depth of around 65mm. Weight is good too, more vintage-like than many contemporary, heavier Gibson ES-335s.

The Custom tops the line in the Mayfield mini range and comes with a choice of four body materials. Our flamed maple version, in its high polish antique tobacco stain finish, is quite a looker but in an understated manner.

The laminate top and back feature very smartly centre-jointed and nicely figured facings, while both the solid sides (thin with un-kerfed linings) and neck have vibrant flamed figuring.

Compared to a solidbody, a thinline like this is a complex build. Aside from the centre-blocked hollow body, both top and back edges are bound but Framus does it all perfectly: the cream plastic binding with inner black/white/black purfling is remarkably clean, the top edges nicely rounded.

This almost obsessive detailing continues to the neck with its impressive fretwork (Framus uses the Plek set-up system, as Gibson does) only marred by some visible filler/adhesive around the inlays although it's far from sloppy.

The 'board isn't bound but the fret slot ends are filled and the edges nicely rounded. The Mayfield's neck is less Gibson like than its build suggests. With a slightly narrow width, the shape is quite a thin-depth 'C' (19mm at the first fret, 22mm at the 12th, slightly thinner than the Framus specs).

It's not ultra skinny, of course, but lacks the bulk of many classic Gibsons. It is, however, very comfortable and perfectly set-up. Playability is superb.

Build-wise there's very little not to like. Okay, the black-faced headstock looks a little dumpy, but the inlays are smart, as is the embossed metal truss-rod cover. It's certainly not a deal breaker on the style front.

More importantly the string splay and back angle are less extreme than a Gibson, which will help with tuning stability, though we wouldn't expect that to be an issue here anyway as the nut work is excellent and we get locking tuners, albeit with rather high slot-head locks.

Quality continues with Tone Pros tune-o-matic bridge and stud tailpiece, a pair of chrome-covered Seymour Duncan humbuckers, small chromed metal knobs with rubber grips and a chrome-topped pickup selector placed a little closer to the bridge than on an ES-335. There's even a well-chromed metal jack plate firmly screwed to the body sides - another change from the classic recipe.

The Custom feels really good from the off. Okay, if you're used to a bigger neck it'll take a little while to get used to this, and they ship with 0.009s - we'd prefer 0.010s as standard and probably go up to 0.011s. It feels like the 0.009s don't quite drive the guitar enough to really maximise the lightweight resonant construction.

But there's no doubt the sounds are in the right ballpark. There's soup from the neck pickup, ring, attack and brightness from the bridge and the wonderful slightly funkier and hollowed mix sits between those two extremes. And by using the volume and tones you can conjure a seemingly endless selection of subtle colours.

All the volume and tone tapers work well, and it proves a very responsive guitar that, like its inspiration, is hard to pigeonhole. If anything the Custom, with its more classic PAF-intended pickups, has a more classic tonality, from clean biting blues from the bridge pickup to the softer, jazzier neck pickup and that timeless mixed pickup tone.

But turn up the wick a bit and it eases into Clapton-esque Cream and more fusion-y styles with plenty of snap and air. Keep on cranking and it'll easily edge into musical feedback while the guitar vibrates on your body.

These Mayfields prove that Warwick - who owns Framus - can make guitars every bit as well as it makes basses. The Custom is a genuine class act, the only thing that we'd like to see would be a bigger neck, but everyone's different and the slimmer neck here might well be your personal ideal.

Framus, therefore, has a lot to compete with on that level but in terms of build quality, playability and sound it has little to worry about. Add in an extensive custom order list of options and if you're looking for a thinline with class, elegance and tons of variety in terms of specification, this is a very good place to start.