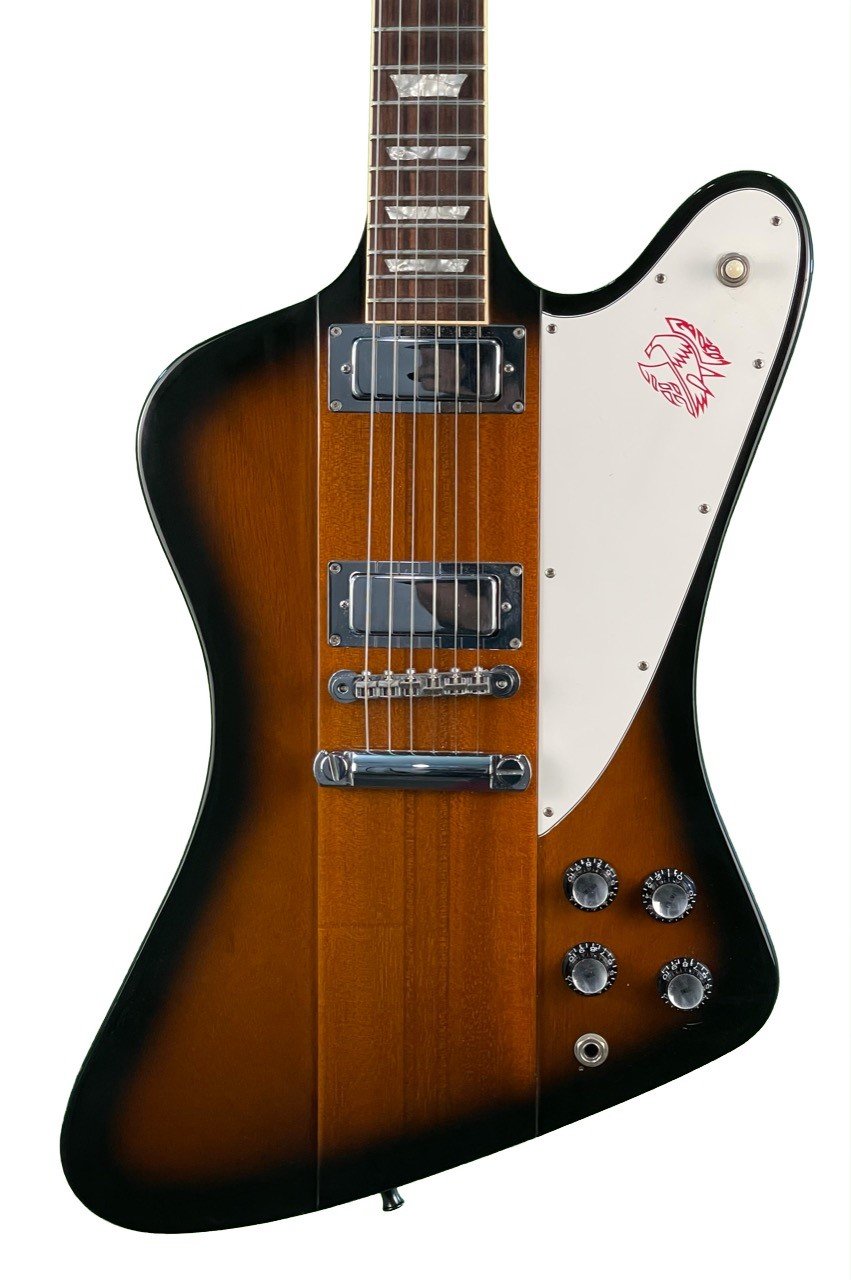 
Exceptionally fine and fantastic looking 2001 Gibson Firebird V in it’s original vintage sunburst finish. Plastic still on the pickguard and back plate. These Firebird Vs are excellent instruments and have unique features to get the look and feel of an old bird such as excellent sounding mini humbuckers, a white pickguard with red Firebird logo, and banjo style tuners. Plays and sounds excellent and comes with the original hardshell case.

This Firebird is much nicer than what Gibson produced in the last few years including the Custom Shop models in my opinion. Some of the Firebird Reissues from 2010 do not feature the classic “banjo style” tuners. Gibson used Steinberger gearless tuners the tuning key on the back and locking mechanism on top of the headstock. Gibson stated that they will no longer be creating banjo tuners. The wood and finish on this 2004 is awesome.

Gibson, in an effort to shred a persona of an “old fashioned” guitar maker from the old world had made several attempts to build guitars with radical body shapes – the Flying V and Explorer in the 1950s as examples. These guitars along with a their higher prices only made them a limited initial success in the marketplace. Gibson wanted to compete better with upstart Fender in those years. So they were looking to design a guitar that would make a statement.

The Gibson Firebird has a very unusual history. Gibson actually hired car designer Ray Dietrich to come up with the unusual look for this guitar they hoped would have popular appeal. Under Dietrich, the Firebird took on the lines of mid-50s car tailfins. Dietrich took the Explorer design and rounded the edges out. The most unusual aspect is that the guitar is “backward” in that the right-hand (treble) horn of the body is longer than the other. Thus, the original Firebirds were unofficially referred to as “reverse”. It features banjo-style tuners and has reverse cutaway. The banjo-style tuners gave the guitar a sleeker appearance as you do now see the tuner buttons when seen from the front.

The Firebird was the first Gibson solid-body guitar to use neck-through construction, wherein the neck extended to the tail end of the body. The neck itself is made up of five plies of mahogany interspersed with four narrow strips of walnut for added strength. The “wings” are glued to the neck-through section. This makes the Firebird quite resonant and if you think of it, gives it some similarity to Les Paul’s “Log” guitar in its design idea.