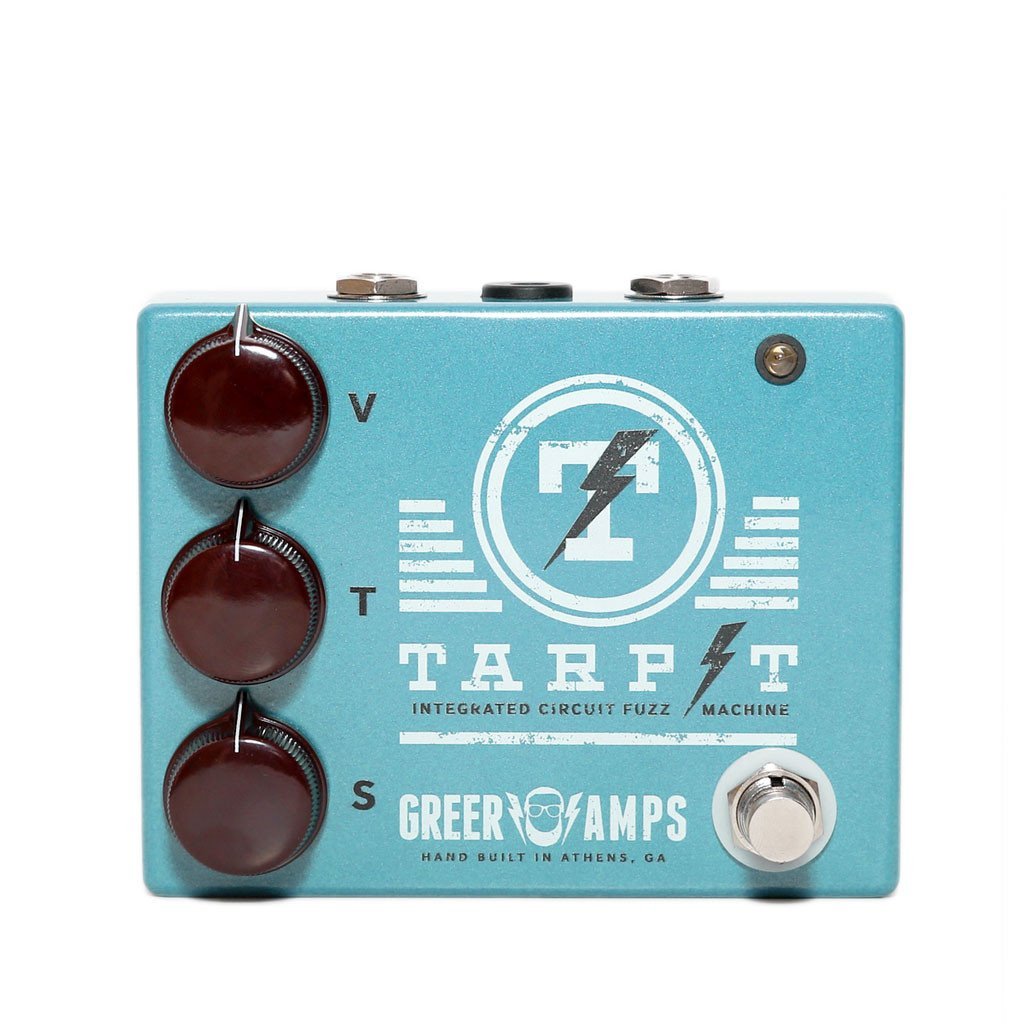 The TarPit Integrated Circuit Fuzz Machine is the newest release from Greer Amps. This pedal was created out of the desire to have the sound and feel of a vintage Muff style fuzz, with grit, and grind that will sustain for days. Based on the vintage Big Muff Pi variant that utilizes two integrated circuits, with some Greer Amps tweaks (not the standard 4 transistor version), the Tarpit has all of the sounds that one might expect from a Muff style fuzz, and so much more.

The Tarpit is built in a rugged powdercoated aluminum enclosure, with printed graphics, designed by Nick DePartee (an awesome graphic designer, and former guitarist for the band Kutless). We chose the most awesome metallic blue powdercoat color that we could track down, and had the graphics set in black and white. The Tarpit features custom Oxblood control knobs by Davies (these knobs are currently available in a limited supply).

With the Sustain control set low, the Tarpit can get dark, and spitty, with a low gain, almost gated feel. Increasing the Sustain control has a double effect—the Tarpit gets slightly brighter, and the fuzz, sustain, and harmonics all increase. The wide sweep tone control brings a new level of versatility to the Tarpit. Turning the tone control down cuts treble, and boosts bass frequencies; setting the tone control in the middle, or slightly above, allows for full guitar and bass frequencies to come out. If you want to get really crazy, push the tone control higher, and you’ll get into some AM radio type frequencies. The volume control utilizes a slightly later taper on the potentiometer. We did this in an effort to allow the user to get their awesome sustain and fuzz at lower volumes when needed…never fear, though, the Tarpit can get as loud as you need it to!

The Tarpit can run off of a battery, or a standard 2.1mm, negative center pin power supply. We placed the in and out jacks along the top of the pedal, as well as the DC jack, in an effort to help with pedalboard layout. The output jack is closest to the volume control.

The Tarpit features Greer Amps’ lifetime warranty, to the original owner, and is built like a tank. We utilize a custom fabricated board that is over engineered, so that you don’t have to worry about your pedal letting you down. The two integrated circuits are mounted in chip sockets, so if anything ever happens to the chips, they can easily be replaced.

ON TOUR AND IN STUDIO WITH DWEEZIL ZAPPA, JIMBO HART (BASS PLAYER FOR JASON ISBELL), LAUR JOAMETS (GUITARIST FOR STURGILL SIMPSON), AND MANY MORE!