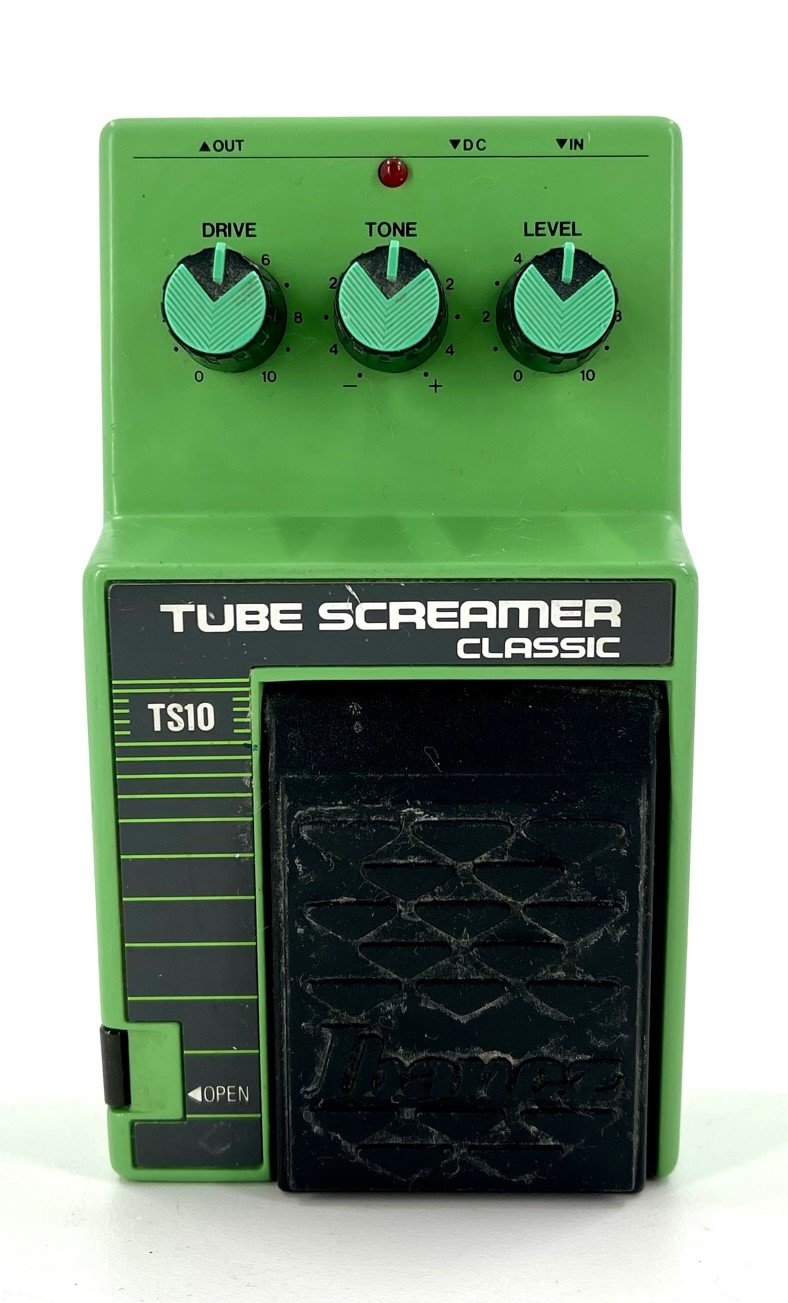 I’d always heard good things about the TS10 Tube Screamer, and if Stevie Ray Vaughn and Mike McCready used it (and even John Mayer, too!), it had to be AOK in my book. Having reviewed and played many different iterations of the infamous Tube Screamer over the years, I had never had the opportunity to play one of these bad boys, and let me tell you, I was not disappointed.

TS9 and TS808 comparisons aside, the TS10 has an ongoing debate amongst players as well: Japan vs Taiwan. There appears to be an overall consensus that the MIJ pedals are superior, but there are arguments against that as well. The pedal we’re reviewing today is a Taiwanese version, but after opening it up, it has the coveted JRC 45580 chip in it, which is apparently what makes all Tube Screamers sound fantastic. With a serial number 8446956, this TS10 was made sometime between 1990 and 1993, although some of those models featured a different, lesser-quality chip, the MC4558.

As with other Tube Screamers, the TS10 features the same three controls: Drive, Tone and Level. This model in particular is extremely responsive to the dynamics of your playing, making it a great pedal to crank up and then control via your guitar’s volume knob, for all the control over your overdrive you could want. Starting with the Tone and Drive around 9:00, it’s fun to try out different settings, both on the pedal itself, and playing with your guitar’s controls. The TS10 is also a joy to use with other pedals, especially a good boost, which can propel the overdriven sound to drive your amp beautifully, just beyond break-up, but still clean and clear.

I’ve never been super-impressed by the TS9, modded or not, and have only played reissue 808s, never got my hands on the original holy grail pedals. So, from my personal perspective, the TS10 is hands-down my favorite so far. Although not built anywhere close to as well as the other models, if you take care of it, it will take care of you (think separate bypass switch, so you don’t wear out the TS10’s on/off switch). Meaty, fat, overdriven tones pour out of this thing, despite being the “inferior” model – if you come across one, don’t hesitate to check it out, it just might replace the boutique drive that currently resides on your pedalboard!