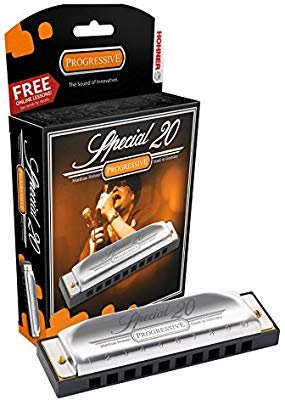 The Hohner 560 Special 20 in country tuning (also known as major 7th tuning in cross harp position) has the 5-draw reed tuned 1/2 a step higher (to F# on a C harp) than normal, allowing you to play a complete major diatonic scale in cross harp. As expert harp player Steve Baker describes in his book, The Harp Handbook, "What all this means in practice is that you can play major melodies whilst retaining the bluesy bending capabilities of the 2nd position. This is great for jazzy numbers or ragtime, as well as many other styles...."

Musicians that favor this harmonica include country music legends such as Charlie McCoy and renowned jazz musicians such as Lil' Ronnie Owens of the Grand Dukes.

The Special 20 is the most recommended go-to harp for harmonica players of any style, including blues, country, folk, or rock. The Special 20 delivers the coveted Marine Band sound and offers the added benefits of its plastic comb, which doesn't absorb moisture. Plastic combs are stable and do not swell, shrink, or crack. Plus they last longer and are more airtight than wood combs that can become swollen, twisted, and warped. Increased airtightness also means increased responsiveness. Plastic also provides comfort and it's smoother on the lips, preventing chafing. Another plus of the Hohner 560 Special 20 is that its reed plates are recessed into the comb. This keeps the 2 (rather sharp) edges of the brass reed plates from harming the your lips. The Special 20 is the harp-of-choice of harmonica virtuoso John Popper of the band Blues Traveler and was played by Bob Dylan on his 2007-2008 tour. Chances are your favorite player has several of these harmonicas in his case.

About Hohner:
Hohner is a family company founded in 1857 in Trossingen, Germany by Matthias Hohner. Handmade quality and close attention to detail has set Hohner apart from the beginning. A top leading brand in harmonicas, Hohner harps are distributed worldwide. Hohner harmonicas are played on the street by buskers, in intimate nightclubs, on festival stages, and even in Carnegie Hall. Despite a diverse harmonica line used in music from country to classical genres, the most famous Hohner harmonicas are their simple, 10-hole diatonics used frequently by blues, rock, country, and folk musicians.